Pabassinas, iced raisin-nut cookies with anise and citrus flavor, are a sweet part of many Dia de los Muertos celebrations.

Day of the Dead (Dia de los Muertos), celebrated on November 2, honors the souls of the dead. The holiday began in Mexico, but has become popular in many parts of the world including the southwest United States.

On Dia de los Muertos, family and friends gather to celebrate the lives of their departed loved ones and pray for their spiritual journey.  A variety of traditional foods are prepared.

Ofrendas include food, candles, flowers, photos, and other tokens. The colors used are symbolic. Yellow, for example, signifies the force of the sun, life, and tragedy. White stands for purity and hope.

I have never been a fan of gruesome and gory Halloween activities. I have written before about banning gore and violence from my kids Halloween costumes as they were growing up.

As a result, my son may have been the only middle school boy in history to dress up as Gondor (Lord of the Rings), Obi Wan (Star Wars), or Neo (The Matrix).

My ban was occasionally met with moans and groans of, “That’s not fair!” but no permanent psychological damage appears to have been caused.

My original reaction to Dia de los Muertos, with the “calavera” decorated skulls, was that it was another gruesome celebration, but it’s not.

Unlike the decorations of Halloween that are meant to be scary, the symbols of Dia de los Muertos represent rebirth into the next stage of life. I think it is a beautiful and comforting perspective.

Most of the ofrenda foods, like pan de muerto (a round sweet bread), or tamales, are not care package friendly. Luckily, Pabassinas cookies are!

Details of those care packages later this week. 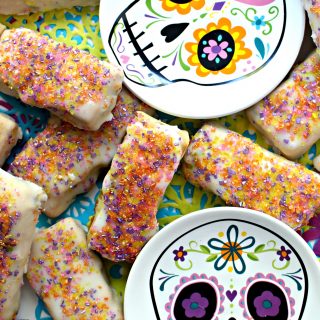 Wrap pairs of cookies, bottoms together, in plastic wrap. Stack wrapped bundles in columns in a freezer weight ziplock bag.